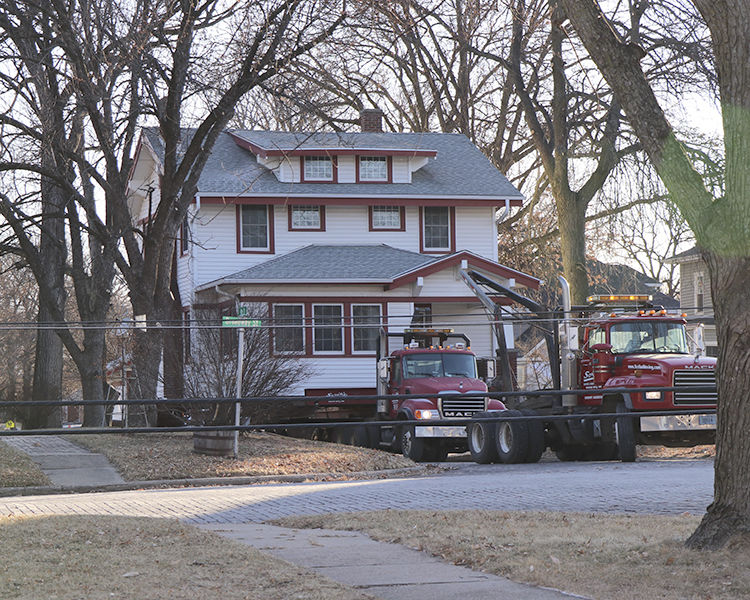 STARTING OUT: Two trucks from Scribs Moving and Heavy Hauling bring a two-story house up Ninth Street to Broadway on Saturday morning as the structure started the 13.5-hour journey to its new home south of Mead. (Staff Photo by Suzi Nelson) 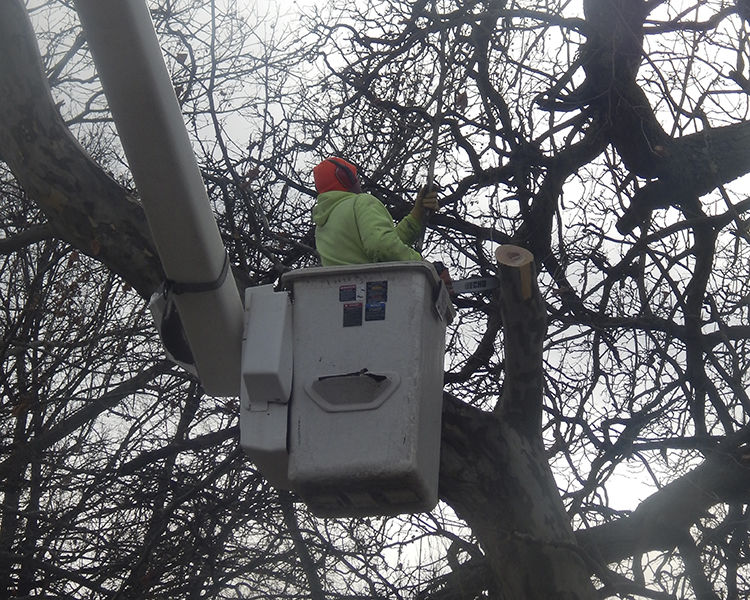 MAKING ROOM: A employee of Ashland Tree Service trims a tree on Ninth Street on Thursday in preparation for the house move. (Staff Photo by Chris Legband)

STARTING OUT: Two trucks from Scribs Moving and Heavy Hauling bring a two-story house up Ninth Street to Broadway on Saturday morning as the structure started the 13.5-hour journey to its new home south of Mead. (Staff Photo by Suzi Nelson)

MAKING ROOM: A employee of Ashland Tree Service trims a tree on Ninth Street on Thursday in preparation for the house move. (Staff Photo by Chris Legband)

WAHOO – At a rate of less than one mile an hour, a house slowly made its way from one Saunders County community to another last Saturday.

The two-story white house with red trim was removed from its foundation at Ninth and Linden streets several weeks ago. It rested on supports, waiting for the road trip to its new home near Mead.

The house was originally purchased in October 2018 by Barb and Eric Hart, who live in the adjacent home to the north, to have a little more space to their property.

After purchasing the house, the Harts had to decide what to do with it. Demolishing the structure was an option, but not one they relished.

“We always knew we wanted that lot, but it was just too beautiful of a house to tear it down,” Barb Hart said.

While they were talking to some friends about the situation, a plan was hatched to move the house. Josh and Cortney Girmus agreed that the house should be preserved.

“It was too nice to tear down,” said Josh Girmus.

So Josh and Cortney Girmus took the home off of Barb and Eric Hart’s hands. They hired Scribs Moving and Heavy Hauling out of David City to transport the massive structure to a subdivision they developed one mile south of Mead. There it will sit on a three-acre lot. Josh and Cortney will remodel the house and sell it through their property investment company. The couple also owns Girmus Dirt Works and Customs, based from their home in rural Ithaca.

It took more than a year to plan the move. Josh Girmus said he hired numerous subcontractors to move utility lines, trim trees, clean up and take care of other associated tasks.

“I had 13 subcontractors lined up for this job,” he said.

The journey itself took 13 and a half hours to complete. There were traffic detours on Wahoo city streets and Highway 92 as the house lumbered down the highway. Temporary power outages also accompanied the move, as crews from Wahoo Utilities and OPPD raised or lowered power lines as the house rolled through the streets and highways.

By the time the house arrived at its destination, it was dark and cold and the crew was tired. So they shut things down before actually putting the house on its new foundation. Josh Girmus said the workers came back Monday morning to move the structure closer to its final destination, but it was not placed on its foundation.

House moving is not new to Girmus. He said his parents moved the former Catholic nunnery from Wahoo to a spot between Ceresco and Wahoo when he was just a small child. He doesn’t remember the move itself, but heard stories about it from others. After his parents moved out of the home, it was turned into a bed and breakfast.

And this may not be the last house move the Girmuses take part in. They have their eye on a house out in country that needs a new location.