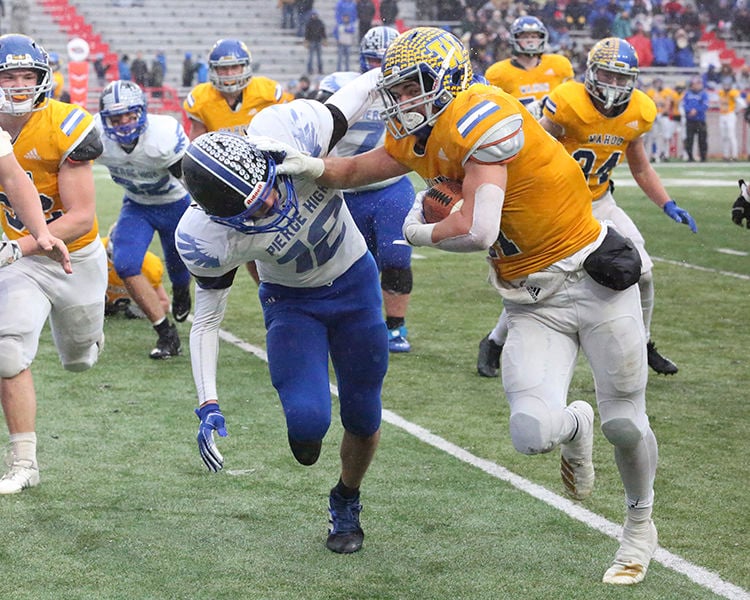 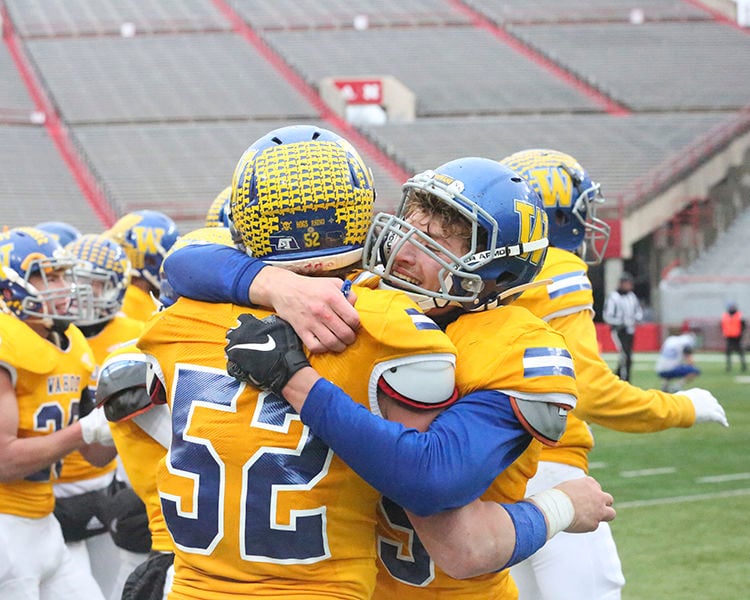 TO THE WINNERS GO THE SPOILS: Wahoo players Kole Bordovsky (52) and Thomas Waido show each other some love after the Warriors claimed the school’s first ever state football championship on Nov. 26.  (Staff Photo by Sam Farmer)

TO THE WINNERS GO THE SPOILS: Wahoo players Kole Bordovsky (52) and Thomas Waido show each other some love after the Warriors claimed the school’s first ever state football championship on Nov. 26.  (Staff Photo by Sam Farmer)

LINCOLN – It didn’t matter that wind chills inside Memorial Stadium dipped under 20 degrees.

It didn’t matter that toes and fingers were numb.

High school kids didn’t even mind hanging out for 45 minutes after the game for pictures, hugs and frozen tears.

The Wahoo Warrior football team were champions for the first time in school history and there wasn’t anything Mother Nature could throw at them to change that.

The Warriors left no doubt as to who was the number one team in Class C-1 with a dominating 38-0 win over number two and previously undefeated Pierce on Tom Osborne Field inside Memorial Stadium on Nov. 26.

The game changed in a three play span midway through the first quarter.

Senior Trevin Luben fumbled in an attempt to return a Pierce punt with 7:47 remaining in the first quarter.

The first big break of the game fell to the Bluejays and Pierce had all of the momentum, taking over at the Warrior 11-yard line.

Two plays later everything changed and Pierce was never heard from again.

With Wahoo senior Gunnar Vanek bearing down on him, Pierce quarterback Dalton Freeman was picked off by senior Kole Bordovsky who rumbled down the Pierce sideline for 78 yards before getting tripped up at the 13- yard line.

“I wanted the pick-six, but, it led to a score for our offense and as a defense that is our job,” said Bordovsky who also set a new school record for tackles in a season with 161. He had 10 stops on Tuesday.

The very next play Luben high-stepped into the endzone, kicker Jesus Zaragoza added the extra point and Wahoo led 7-0 with 6:56 remaining in the first quarter.

Mo was on the Wahoo sideline, where it would stay for the next 42 minutes and 56 seconds.

After a Pierce punt, the next Wahoo drive stalled at the Pierce seven-yard line and Zaragoza tacked on three more points on a 24-yard field goal.

After another Pierce punt, Wahoo took over at their own 32-yard line with 10:27 left in the second quarter.

A methodical 15 play, 68 yard drive resulted in another touchdown for the Warriors, coming on a 2-yard touchdown run by Luben.

Wahoo would add to their lead after senior Thomas Waido recovered a fumble at the Pierce 27-yard line with 3:24 remaining in the first half.

Seven plays later Wahoo cashed in the turnover on Luben’s third TD of the game, this time from four yards out. Zaragoza added the EP and Wahoo led 24-0 at the half.

Late in the third quarter, a 69-yard punt by Freeman pinned the Warriors at their own 1-yard line.

Luben went off tackle, spun off a pair of Bluejay defenders and went streaking down the Bluejay sideline.

79 yards later, it was only a great effort from Freeman which kept Luben out of the endzone, tackling him at the Bluejay 20-yard line.

“I picked him up on the big screen. I thought I could get there, but he had the angle on me. I should have scored there,” Luben laughed.

Six plays later, Luben did score on a 3-yard run, stretching the Wahoo lead to 31-0.

A desperate and scrambling Pierce offense turned the ball over again, an interception by Luben, setting up the Wahoo offense at the Pierce 48-yard line.

A combination of runs by Luben and sophomore Colin Ludvik set up Wahoo with a 1st and goal at the Pierce 11-yard line.

On second down, Luben scored his fifth touchdown of the game on an 11-yarder with 4:20 left in the game, pushing Wahoo’s lead to 38-0.

“There’s a reason why he’s been asked to walk on,” Pierce coach Mark Brahmer said. “He does a nice job of turning his hips and getting sideways, and then he also does a good job of just running with power. It’s a nice combination of reasons he’s run for a couple-thousand yards these last couple years.”

Wahoo piled up 393 total yards with 346 coming on the ground.

Pierce was limited to 90 yards rushing and 94 total yards after coming into the game averaging 414 yards rushing through 12 games.

“We were dialed in,” Wahoo coach Chad Fox said. “We definitely knew they were going to run the ball, they were going to test us in every gap that they could, and our guys answered the challenge. It was a great defensive performance.”