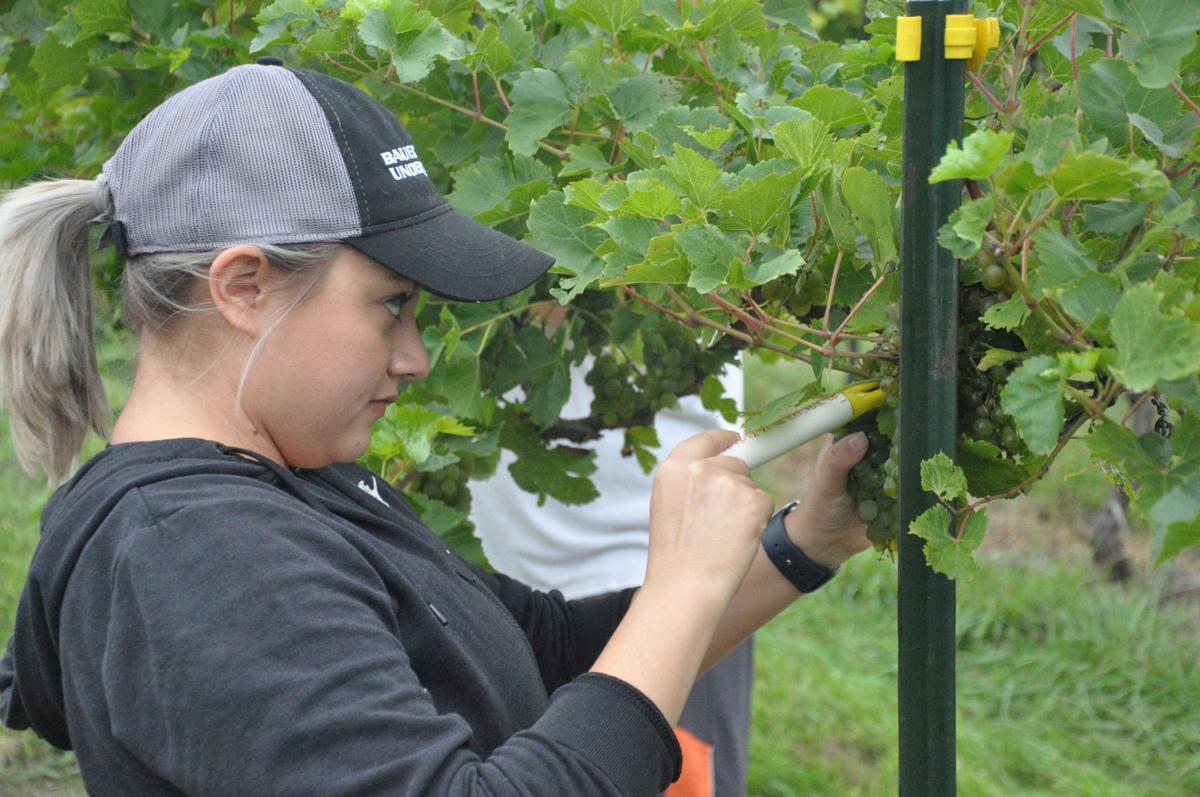 CUTTING VINES: Kaitlyn Cassidy cuts of a bunch of LaCrosse grapes at Deer Springs’ vineyard Aug. 25. Cassidy was one of around 20 volunteers who helped the winery bring in its crop of white grapes. 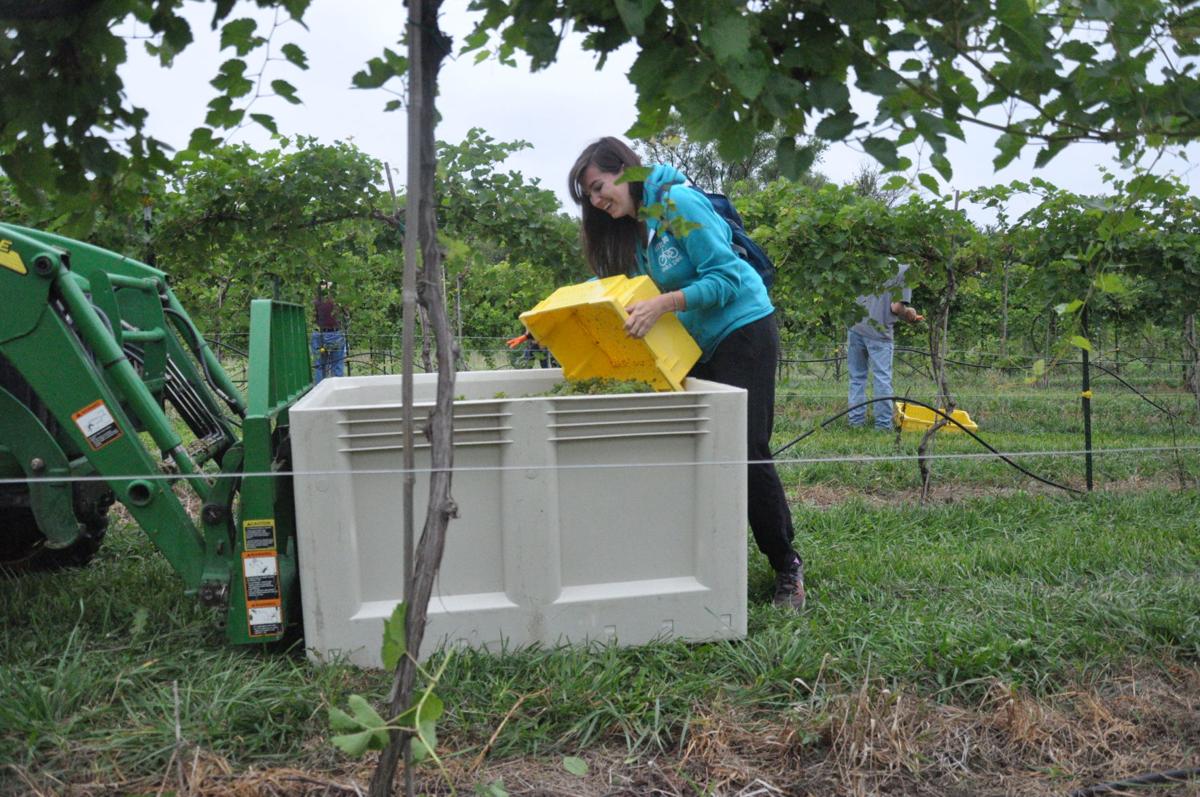 FRUITS OF LABOR: Chloe Cahill dumps a tub of gathered LaCrosse grapes into a bin at Deer Springs’ vineyard Aug. 25. Cahill was one of around 20 volunteers who helped the winery bring in its crop of white grapes. (Staff photos by Allan Christensen)

CUTTING VINES: Kaitlyn Cassidy cuts of a bunch of LaCrosse grapes at Deer Springs’ vineyard Aug. 25. Cassidy was one of around 20 volunteers who helped the winery bring in its crop of white grapes.

FRUITS OF LABOR: Chloe Cahill dumps a tub of gathered LaCrosse grapes into a bin at Deer Springs’ vineyard Aug. 25. Cahill was one of around 20 volunteers who helped the winery bring in its crop of white grapes. (Staff photos by Allan Christensen)

PRAIRIE HOME – As summer ends, area wineries are into the harvest season.

The Deer Springs Winery, located just south of Prairie Home on Adams Street, is busy with the harvest and pressing of grapes for its local wines.

On a recent Saturday morning, owners Jon and Jennifer Reeder were up early with their son-in-law, Jordan Goodrich, beginning to press a shipment of Prairie Star grapes.

The grapes come from Homestead Prairie Vineyards in Crete.

Seven tons of grapes were brought in by truck to be pressed by the three-person team. The pressing is just another step in the sometimes years long process in making white wine.

At James Arthur Vineyards near Raymond, Owner Jim Ballard said that his crew has been out the past several weeks gathering their own harvest.

Starting Aug. 16, the vineyard picked about 40 tons of grapes for its popular edelweiss. It took about 40 to 50 people four days to pick the grapes for James Arthur Vineyards’ best seller, Ballard said.

At Deer Springs, the wine process usually starts with the white varietal of grapes because they often mature faster. Jennifer Reeder said that the reds have been even slower maturing this year, due to the chronic lack of sunshine this summer.

Ballard said that the season’s dreary weather had delayed their red wines as well.

“It might take just a little longer, but we’ll get there,” Ballard said.

Reds often need more time in the sun to ripen and produce the natural sugar of the grape.

Without the sugar, the yeast will have nothing to eat, thus no fermentation. And without the fermentation, all you have is grape juice.

The pressing process starts with what looks like a large industrial grinder.

The grapes are dropped in and then fed into paddles that push the grape through grates. The process also separates pieces of stem out and ejects them out the other side.

The pump at Deer Springs moves the grapes to the press, which holds about two tons at a time.

The juice is strained out from the skins and seeds. Inside the press is an air bladder that inflates and squeezes the grapes at varying pressures.

In between the inflation of the air bladder, the press spins. Goodrich said that as the air bladder presses, the pressure can cause pockets of juice to form. The spinning allows the grapes to shift so little is wasted.

From there, the juice from the press is pumped into giant 500-plus gallon tanks. Jennifer Reeder said it would ferment for around a year.

The red wines at Deer Springs, when their turn comes later in the season, will be stored in oak barrels.

The barrels are a combination of American and French oaks. It is a pairing that Jennifer Reeder said works best with Nebraska grapes.

On Aug. 25, a group of volunteers came out to help pick white grapes for Deer Springs’ LaCrosse.

Around 20 volunteers, armed with early-morning donuts, walked through the vineyard’s southern field snipping grapes from the vines. Jon Reeder said he expected about 1.5 tons of grapes from the work.