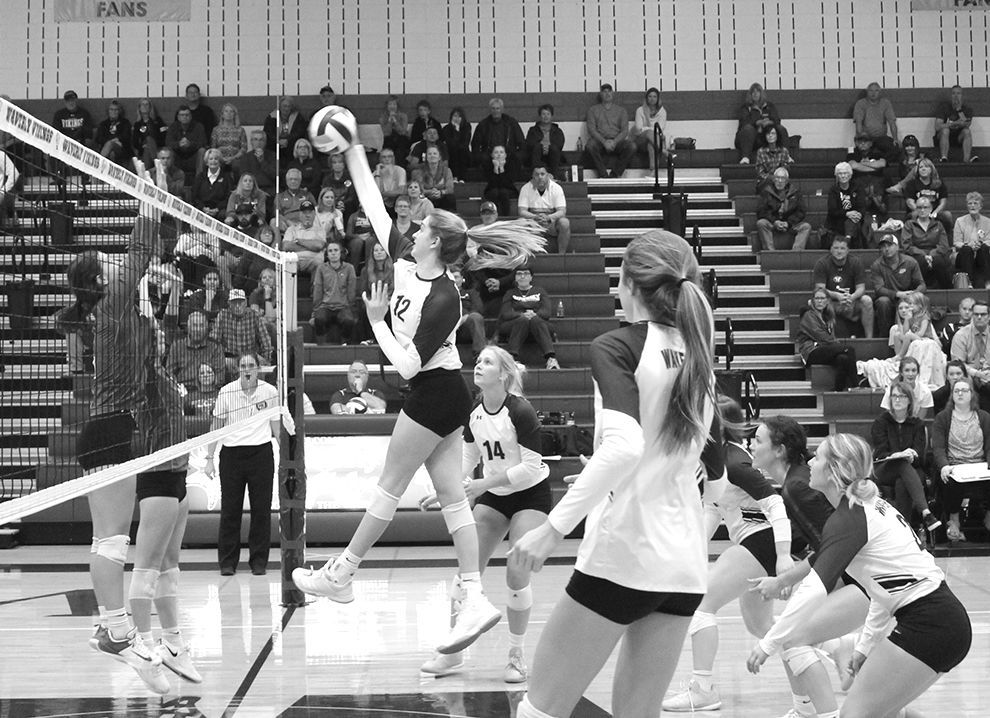 PLOUZEK KILL: Senior middle block Abby Plouzek goes up for a spike versus Plattsmouth on Tuesday. The Vikings swept the Blue Devils 3-0 in the match.

PLOUZEK KILL: Senior middle block Abby Plouzek goes up for a spike versus Plattsmouth on Tuesday. The Vikings swept the Blue Devils 3-0 in the match.

WAVERLY – The Viking volleyball team played in seven matches over the week, winning five, but dropped its first two matches of the season at the Lincoln Northeast Invitational.

Waverly started its week of play on Tuesday with a match versus the Plattsmouth Blue Devils.

Head Coach Terri Neujahr said that after the lackluster first set she challenged the team between sets.

The talk worked, at least for set two.

The Vikings sided out the Blue Devils immediately and then went on a huge run keyed by senior libero Kelsey Perrotto’s serve and junior Whitney Lauenstein’s offense.

Perrotto’s serve put Plattsmouth out of system and Lauenstein cashed in on set after set from senior setter Annika Evans to run away from the Blue Devils.

For the weekend, the Vikings headed south for the Lincoln Northeast Invitational for a guaranteed six games over Friday and Saturday.

In a tournament that featured several top teams in the state and where Waverly was the only Class B team in the field, Waverly finished third.

The first match of the tournament was with the Omaha Central Eagles.

Neujahr said that Central presented some problems with their size but that the Vikings adjusted and did a few different things strategically to pull off the win.

The next match of the day was versus Lincoln Southeast.

The Knights and Eagles were the only two teams the Vikings would face over the weekend that were unrated in the Omaha World-Herald’s ratings.

Neujahr said that the Vikings serve kept the Lincoln Southeast hitters from swinging in system most of the night, as they coasted to a 2-0 win (25-15, 25-18).

In the final match of the first day of the tournament, the Vikings would run into something they had not seen since last year’s state tournament, a loss.

“They had a lot of weapons and they were a pretty dynamic team,” Neujahr said about Millard South. “We just never could quite get in sync. We never could catch up to the speed of what they were playing.”

The opponents would not get any easier on Saturday.

The Vikings started the day with a matchup with No. 4 Lincoln Pius X.

Senior middle blockers Atley Carey and Abby Plouzek combined for 12 of the Vikings’ 35 kills on 21 swings.

The Vikings looked to carry that momentum into their next match with Omaha Marian but fell short to the eventual tournament champs, 2-0 (25-20, 26-24).

The Class A No. 10 Crusaders and Vikings went back and forth in two tight games but Marian played almost error free volleyball to take the win.

Waverly’s final game of the weekend would be in the third-place game versus the Elkhorn South Storm.

Neujahr said that the matchup with the Storm was one the team was hoping for because Elkhorn South had eliminated the Vikings from last year’s Class B state tournament.

“It was kind of like watching two prize fighters just slugging it out to see who’s going to be the last one standing,” Neujahr said about the match.

Neujahr said a Vikings comeback that fell short in the second set felt like it changed the match.

Down 17-6 in that second frame, the Vikings stormed back and made it a five-point game before the Storm could finally finish it off.

The momentum from that rally set the Vikings in the right direction as they took the third and decisive game.

All told, Waverly’s week pushed its record to 21-2.